Although most of the modern AAA titles are quite enticing, the older console games are still intriguing, probably because we grew up playing them and had some of the best times of our lives.

To play these older console titles today, you don’t necessarily need all the required equipment plus if you happen to have a console or two lying around, today it’ll be given another purpose to serve you in your adventures!

It is modern technology whose progress has made us capable of running console games on our PC by creating several kinds of emulators that collectively make it easier for us to run all the classic games of our time.

While there are many Emulators on the market that provide different capabilities, the PPSSPP is among one of the best emulators to run several PSP video games.

PPSSPP is an open-source project which allows worldwide developers to improve the system and provide it to us for free. PPSSPP lets you play games in HD resolution on your tablets and PC while also allowing you to save game states to resume them later.

You can additionally customize your key mapping if you’re using a PC which will be beneficial since you’ll also be able to apply both anisotropic filtering and texture scaling for better and smoother performance. All in all, PPSSPP is a quite capable emulator to run all your favorite games.

Before we get on with the steps to install PPSSPP on Windows, let’s first check the minimum requirements and other requisite components. 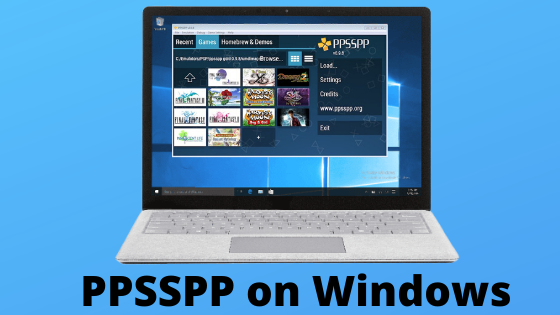 If you’ve recently built a modern PC then you’re in no danger and could easily run PPSSPP on your system without any difficulties and errors. However, if you happen to have an old system then it would be advisable to meet these requirements by upgrading the hardware and software. Not doing so will make you prone to damaging your system seriously if you attempt to install this emulator.

Any Dual-Core CPU, or a Single-Core CPU of at least 2.0GHz or higher

At Least 2GB RAM (more would be better)

You’ll need a minimum of 5GB of free storage space..

Note: Unless you plan on having more games, this much disk space should be enough.

Note: Some of the CPUs/APUs may already have inbuilt graphics which too would work fine.

Make a note of your System Type as to whether it is x64 (64-bit) or x86 (32-bit) because it’ll help you acquire respective necessary packages further in this guide.

Depending on your PC build, you shall need additional programs and drivers installed on your system to successfully run the PPSSPP emulator.

Note: In rare cases, you’ll also need to get some important .dll files to run the PPSSPP emulator without errors.

If your PC meets all of these requirements, we’ll need to then proceed towards obtaining the proper version of PPSSPP installer for your system based on its architecture. Visit the official website of PPSSPP and use the appropriate download button to download the respective version that supports your system.

If you prefer an offline installer, then you can get the x86 build for your 32-bit system here.

If you prefer an offline installer, then you can get the x64 build for your 64-bit system here.

You can also download a compressed .zip package containing both versions and manually extract it to pick the one that suits your system.

Once the extraction is complete, locate and open the folder to ascertain all the files are present and run the PPSSPP Emulator by double-clicking on the ‘.exe’ file named ‘PPSSPPWindows’

After you’ve checked that the emulator works as expected, it’s time to install games.

After you’ve downloaded the desired ROM(s) for the games that you wish to play, you’ll need to load them into the system by following these steps.

Using this guide you’ll be able to download the PPSSPP Emulator on Windows easily. Now, play hundreds of PSP games in HD quality with incredible sound on your PC.